[center]Stepdaughter Braylin (Bailey) is clad in sexy pink lingerie, slipping on denim shorts. She poses for several sexy selfies, and accidentally texts one to her stepfather (Clarke Kent). He's in the living room reading a book when she sneaks in, trying to intercept the photo received on his phone, which is lying on the couch next to him. "Is that Braylin?", he asks, without turning around to look at her."What do you think?", she says while covering his eyes playfully with her hands from behind the couch. "Ah, I think it's my sweet Braylin", he says. "I just want to give my favorite stepfather a little kiss. What are you doing?", she says. "Thought you could surprise me, didn't you?", stepdad mocks. "Yeah, I did", she says as she picks up the phone surreptitiously. "Well, you can't fool me, you little prankster", he says triumphantly, taking his phone from her hands."Well, I just wanted to show you something", she declares. "You know back home in England the children aren't usually quite so casual with their elders", he points out. "Well, I could stop if you like. I could just go", she retorts. "No, I like it. You and your mother are really something else. Nothing like the women back home", he claims. "You know we're lucky to have such a refined man in our home. I was worried it would seem 'UNCOUGH", she says. "Uncouth, sweetheart", he corrects her pronunciation. "It's been a whirlwind six months moving in, marrying your mother", he goes on. 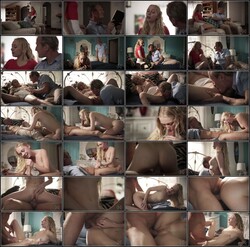